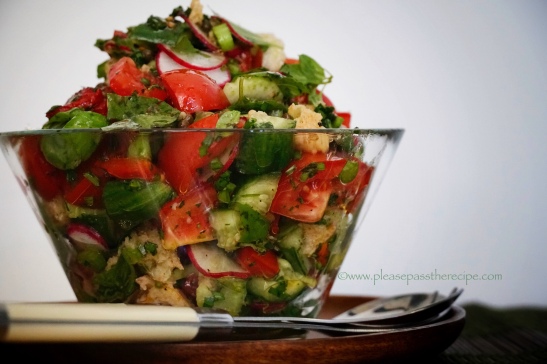 My Dad always referred to salad as rabbit food. That was several decades ago when “salad’ conjured visions of shredded iceberg lettuce, sliced tomato and cucumber, pickled beetroot from a can and maybe a little shredded carrot arranged on a plate around a some slices of cold meat cut from the Sunday roast leftovers. There was no dressing. Dad would dollop sweet commercial mayonnaise on his salad.

I tend to agree with my Father’s assessment of Mum’s salad, but that was the style at the time. Thanks to the influence the first wave of migrants from the Mediterranean region had on the way we eat, salad as Australians know it changed for the better. We were introduced to olives and olive oil, roasted red peppers, rocket, pine nuts, capers, anchovies, fresh herbs, radicchio and fennel. This small example of commonplace ingredients, food I take for granted today are from a much longer list of items that I use when I make salads. I was surprised to learn that even amongst my friends though this isn’t always the case.

We were sharing Sunday lunch recently with friends, a meal to which we each contributed. My big bowl of Panzanella became the centre of attention when someone remarked they had never seen torn bread in a salad before. I was quite surprised to learn that most seated at the table had never heard of Panzanella or the plethora of other traditional bread salads in non Anglo cultures. It was reflecting on that conversation that led to this post.

In Brisbane’s hot summer, we eat a lot of salad, both as an accompaniment to a piece of grilled protein or savoury tart, but more frequently as our main course. Like any dish which is a sum total of it’s parts, a salad needs to be harmonious on the palate, but to really shine it needs to have contrasts of texture and flavours too, a balance of crunch, acidity and savoury sweetness.  The vegetables provide the bulk.

There is no strict recipe for my Panzanella, but here’s a rough guide to what I do.

My Panzanella serves 2 as a main meal, 4 as an accompaniment

2 radishes, very thinly sliced ( I use a mandolin )

1/2 cup basil leaves, torn in half

Tear the bread into small portions and put it into the bottom of a large salad bowl. Wash and roughly chop the tomatoes and cucumbers and scatter them over the breads.

Sprinkle over the salt and drizzle with the olive oil. Do not toss the vegetables and bread together. Salting the vegetables will draw out the juices and be absorbed by the bed of bread.

Season with a generous grinding of black pepper.

Add the remaining vegetables and herbs in layers in the order listed.

Cover the bowl and allow to rest at room temperature for 30 minutes.

Just before serving, sprinkle over the red wine vinegar then toss the salad to serve.