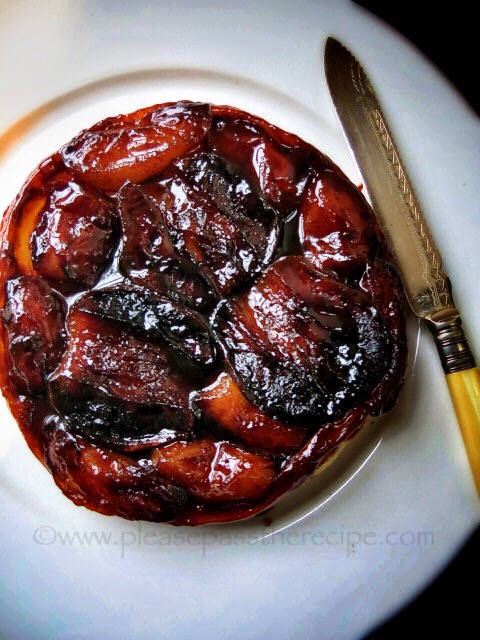 Autumn is apple season in New Zealand. M loves apple desserts so it was no surprise when he ordered Apple Tarte Tatin during our recent holiday. The first was very disappointing, so when it appeared on another menu he tried again, and then again. Not once but three times in three different locations he was served a tart with soggy pastry and blond apple. Frankly, I found them inedible.

I forgave the first misdemeanour but became enraged by the second. The third tart, served in a high profile Wellington establishment prompted me to write this post. It was as if the pastry cook had never seen or tasted this classic French dessert. What was presented could not even been classified as an interpretation, it was appalling!

Strong caramel flavour is the integral part of many desserts, Tarte Tatin is dependent on it. Pushing the caramelisation of sugar to a point beyond golden strikes fear into even the most experienced cook because if you stop too soon no flavour develops, go too far and the sugar will burn and become unpalatably bitter. Making a successful Tarte Tatin takes courage

Choose apples which hold their shape when cooked, such as Golden Delicious. As they cook on the stovetop in the sugar and butter the juices will flow. It’s essential that all the moisture has evaporated from the pan and the sugar is deeply caramelised before the pastry lid is added. You want the pastry to bake, not steam.

Make your own sour cream shortcrust or use good quality commercial butter puff pastry for the tart base. Both will work equally well.

The secret to this French classic is all in the cooking of the apple and the making of the caramel. Pay close attention, get these steps right and you will have a sublime dessert of dark caramelised apple on a crisp pastry base. Once you have mastered the technique, it will become a dessert you can pull together with minimum effort.

An ovenproof saute pan, preferably cast iron is all the equipment you need, the size dependant on the number of people you intend to serve. My 18cm Le Creuset pan made a tart to serve three. Allow a small apple per person then for every apple use 15g of butter, 30g of sugar and 1 teaspoon lemon juice. The size of the Apple Tarte Tatin you make is infinitely flexible.

Roll the pastry 3mm thick and cut to fit the top of your chosen pan. Chill until ready to use.

Peel, core and halve the apples.

Put the sugar, butter and lemon juice the shallow saute pan with an ovenproof handle.

Over a medium heat melt the butter sugar and lemon juice. Once it begins to foam arrange the apples, cut side down in the pan. They won’t easily fit initially, but as the apple cooks they will shrink.

Cover the pan and cook over a medium heat for 10 minutes.

Remove the lid, fill any gaps that appear with thick slices of apple so the base of the pan is well covered then continue cooking until all the moisture has evaporated and the sugar is well caramelised, a further 10-15 minutes.

Remove the pan from the heat and allow the bubbles to subside.

Lay the pastry over the apple and push down firmly.

Use a sharp knife to create a few steam holes in the pastry then place in the hot oven 220C for 5 minutes.

Reduce the heat to 200C and bake for a further 5 minutes or until the pastry is golden and firm to tough in the centre.

Remove the tart from the oven and allow to rest for 5 minutes before carefully inverting onto a plate. Replace any apples that become dislodged.

This is the best pastry recipe I have ever used, bar none. Passed to me by Marieke, who taught me so much about food and cooking, it is a dream to handle. It bakes into a strong, yet short flaky pastry that melts in the mouth.

Rub the butter into the flour until it resembles breadcrumbs.

Add the sour cream and stir only until a ball forms.

Chill for at least 30 minutes before rolling.