There has been a lot of discussion about apple desserts in my kitchen in the past week or two. I‘ve recently posted two recipes, Apple Tarte Tatin and Apple Walnut Pie, and while the man I cook for had no hesitation eating either, both times he’s commented about the disappointing flavour of the apples. In one instance, I used Jonogold, the other Granny Smith.

This prompted me to buy one each of the six different apple varieties available from my local fruit shop for a cooked apple taste test.

I peeled cored and cut each apple into eighths. After adding 2 tablespoons of water to the pan and bringing it to the boil, I covered it tightly and simmered for 5 mins. I checked the moisture then simmered the apple for a further 5 minutes. I added nothing but water to the pot. We tasted them unsweetened.

We judged each on it’s inherent sweetness, moisture, texture, aftertaste, and the overall eating pleasure. In order of our preference here’s what we found.

The clear winner was the Pink Lady. Generally accepted as a good quality apple for eating fresh, this was our clear favourite when cooked. It was sweet, but with a clean acidity.The fruit had maintained it’s structure and offered a nice resistance when bitten into. All the water had been absorbed or had evaporated after 8 minutes of cooking so I removed it from the heat. It was still pleasantly moist, but would have scorched if left to continue cooking. The Pink Lady’s flavour lingered pleasantly on the palate.

Jazz, another red variety and one I hadn’t previously tasted was our second choice. Jazz could have done with an extra few minutes in the pot. The texture still had an element of crispness, and the mouthfeel was a little dry. It was a fresh tasting apple, not very sweet but it generally lacked a depth of flavour.

The perennial favourite cooking apple Granny Smith was our third choice. It was no surprise that this apple was reduced to pulp after just 8 minutes cooking time. This apple was sweeter than the jazz with a nice acidic finish, but little aftertaste. The lack of structure dragged this down.

Our Golden Delicious specimen was bland, just sweet, but with little acidity and even less apple flavour. While it had maintained it’s structure during the cooking process it had a slightly mealy texture.

Jonathan, the classic red eating apple had an unpleasant slippery texture after being cooked. It had a nice firm bite, but it seemed dry. There was an unpleasant metallic after taste.

To cook a Fuji apple was a big mistake.It was soft and mushy even though it had held it’s shape. After 10 minutes cooking time there was still a puddle of water around the fruit. The apple was tasteless and left an unpleasant flavour lingering on the palate.

None of these apples really excited our taste buds. They were bought from a greengrocer with an excellent reputation for buying from small orchadists and none had been in coolstore. I just hope that the apples I buy from the Farmer’s Market this week are more satisfying! 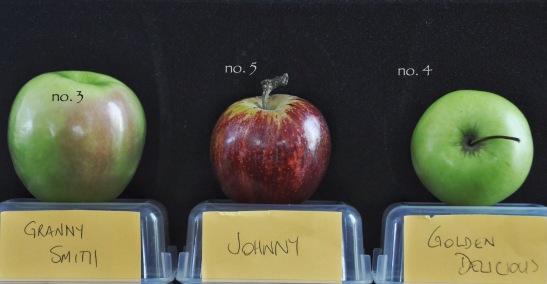