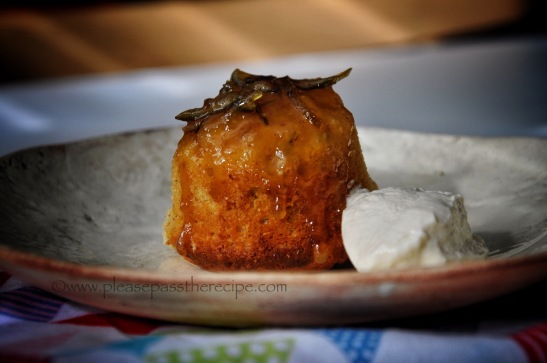 Rib sticking winter puddings were a mainstay of dinners during the cold months of my childhood, a throwback to my British working class heritage. Pudding was the only incentive to eat the greens on my plate which had been boiled until grey and soggy but there was no dessert until they were gone so I doggedly swallowed them down.

My favourite winter pudding from Mum’s repertoire were those which were steamed in an earthenware basin topped with butter papers secured with string. Mum would sometimes spoon golden syrup into the basin before adding the pudding batter but I liked it best when she used homemade jam or marmalade which would run in glossy rivers down the sides of the pudding when it was turned onto a plate. The pudding needed to last a few nights so we were only served a small portion, but it was slathered in thick custard and filled us up.

To honour the memory of my childhood, I still occasionally make pudding in the winter months although it’s rare for me to actually eat it. Lucky Mr PPTR loves dessert.

A recently made batch of lime marmalade inspired me to make pudding. I only used a small number of limes but we have endless jars of marmalade even after giving 2/3 of it away. I couldn’t be bothered messing around steaming a large pudding so decided to bake them in individual serves and freeze some for another time.

A delicious finish to dinner on a cold winter’s night.

Spoon 1 heaped dessertspoons of marmalade into each.

Combine the dry ingredients in a bowl and whisk to combine.

Combine the melted butter, eggs, yoghurt, and marmalade and whisk to thoroughly combine.

Add the wet ingredient to the dry and stir thoroughly to combine.

Divide the pudding batter into the prepared dishes.

Put the dishes onto a tray, place in the middle of the oven and baked until cooked through, about 30 minutes.

Remove from the oven and allow to cool for 10-15 minutes before inverting onto serving dishes,