Rabbit in Mustard Cream Sauce and The Margaret Fulton Cookbook 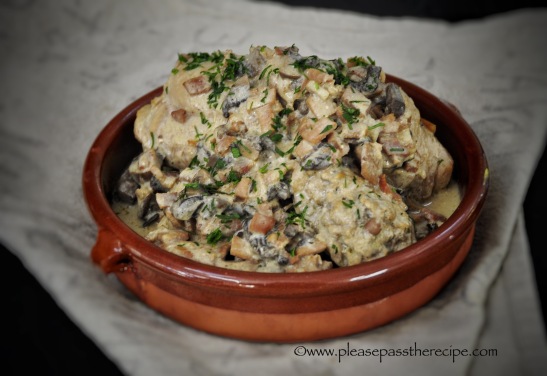 Margaret Fulton and I go back a long way, a very, very long way. Receiving a copy of The Margaret Fulton Cookbook as an engagement gift from an Aunt and Uncle marks my first step up the culinary ladder. It was my very first recipe book. The can opener they gave my other half speaks volumes about my skills forty years ago.

Most Anglo Australian home cooks were stuck in a meat and three veg rut until Mrs Fulton came along and I have to thank this hefty volume of recipes for opening the door onto a whole world of previously unknown flavours and techniques. Margaret Fulton was the first Australian cookbook writer in the modern genre and many of her books are still being updated and reprinted today, close to fifty years after the first edition.

In my teenage years my Mum had taught me to cook very simply so I was in awe of Mrs Fulton’s recipes and considered them too fancy for weeknight dinners. I broke the number one rule of entertaining and tried out recipes on my family and friends. It’s a credit to the quality and accuracy of the recipes that there was never cause for hunger, tears or embarrassment.

I’ve made upward of thirty recipes from this book over the years, from simple soups and salads to complex pastries and sauces, but now, it’s very rarely taken down from the bookshelf. Some ideas from it’s pages are committed to memory, others I’ve simplified and made my own, but in reality my palate, and food trends have moved beyond these recipes which date back to the late 1960s. I’ve been on a fun meander down memory lane, revisiting The Margaret Fulton Cookbook for The Cookbook Guru, a forum where bloggers from around the world cook from, and blog about their experiences with recipes from the one cookbook.

It’s many years since I last cooked rabbit, and turned to Margaret Fulton for guidance. Rabbit is food of my childhood, the one game meat my father hunted when times were hard and rabbits were in plague proportions on Australian farmlands. I chose a wild rabbit rather than one that had been farmed and soaked it as the recipe instructed to “cleanse” it of a potentially strong gamey flavour. I made a few minor alterations to the original recipe including swapping the onions with mushrooms to comply with my diet.

You need to start this dish the day before you intend to serve it. This is a simple rich braise. The meat was tender and tasty, the sauce absolutely luscious. Braised rabbit will be a regular over winter!

Confession: I jumped the gun and prepared this post before Leah announced the designated book. I prepared this recipe is from The Complete Margaret Fulton Cookbook.

Joint the rabbit. Take off the hind quarters, the forelegs and the saddle. Alternatively smile and ask the butcher to joint the rabbit into six and include the scraps so you can make stock.

Put the rabbit pieces into a non reactive container, cover with water mixed with1/2 tablespoon of vinegar. Allow the rabbit to soak for at least six hours or overnight.

The next day, drain the rabbit thoroughly and pat it dry on paper towels.

Preheat the oven to 150C.
Melt the butter and oil together in a cast iron lidded casserole dish and saute the bacon and mushrooms until well coloured. Set aside.

Add the rabbit to the pan and saute until golden.

Return the bacon and mushrooms to the pan, then add the bouquet garni, the mustard and enough stock to completely submerge the rabbit. Bring the stock to the boil, cover the surface with a piece of baking paper, then the lid. Braise in the oven for 90 minutes.

Put the pan back onto the stove top, remove the rabbit pieces to rest, add the cream to the pan and reduce the sauce until thick. Season with freshly ground black pepper to taste.

Return the rabbit to the pan, turn it in the sauce to coat and gently reheat.

*To make rabbit stock: Brown the scraps and trimmings of the rabbit in a little oil. Add enough water to cover, the bones, add a carrot an onion and a stick of celery. Bring to the boil then reduce the heat and simmer for 1 1/2 hours. Strain.

** I used pre-prepared Maille dijon mustard. After the rabbit was cooked and I had reduced the sauce we thought it was a tad salty though we liked the mustard kick. Next time I would halve the dijon mustard added at the beginning of the cooking and add a teaspoon of dry mustard powder mixed to a slurry with part of the cream when I am finishing off the sauce.

***Bouquet Garni: 2 bay leaves and a sprig each of rosemary, thyme, sage and parsley, tied into a bundle with kitchen string.

This entry was posted on May 7, 2015 by ladyredspecs in Food, Gluten Free, Main Meals, Rabbit, The Cookbook Guru and tagged cream, mustard, rabbit, the cookbook guru, The Margaret Fulton Cookbook.