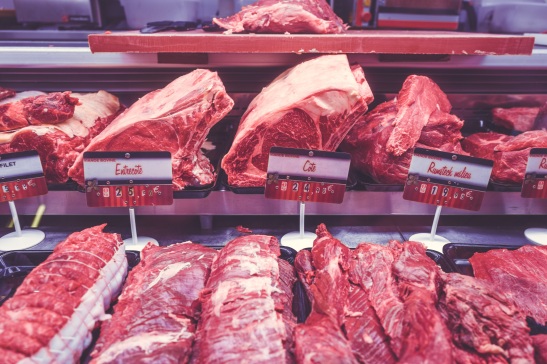 In the past few months there’s been a flood of information in the Australian media focussing on the ethics of eating meat.  I’ve absorbed a whole raft of information, some of it new but most reworded to make it relevant to today’s hot issues about animal welfare, the environment and health. The hard part is processing what I’ve learned, deciding what’s important to me as an individual then actioning changes to my eating habits.

I’ve an omnivore and have been most of my life. There have been a few times when I’ve eschewed meat and once for close to 12 months after a brush with bowel cancer, I was a vegan. Combined with a regime of meditation and exercise, that year ironically was the healthiest of my life, but for me, it was unsustainable.

After discovering I had fructose malabsorption again my daily diet was turned on it’s head. Many vegetables, lots of fruits and all pulses are excluded from the FODMAP diet so I found increasingly I was planning meals that included meat, fish chicken and pork mainly, but after reading “My Year Without Meat” by Richard Cornish and watching Matthew Evans’ documentary series “For The Love of Meat” on SBS I’ve decided it’s time for a close look at my marketing decisions.

I read Peter Singers treatise on Animal Liberation late in the 1970s while going through a wholemeal hippy vego phase. I’ve been conscious of the source of my meat ever since. For twenty plus years after that, it was almost impossible for a city person to be sure where their meat was grown, but thankfully for the past decade it’s been much easier to buy organic, ethically raised and compassionately slaughtered animal products from Farmers Markets and niche retailers.

The demand is driven by the high end of the market and it comes at an outrageous cost to the consumer, but if the treatment of animals is more empathetic to their natural needs, if the impact of animal husbandry on the environment is reduced then as far as I’m concerned, it has to be good. I choose the secondary cuts and cook them carefully and I reduce the amount I consume to bring my household budget back into balance.

I constantly remind myself that cheap food comes at a high price somewhere along the food chain, be it to the farmer and his workers, the animals or the environment. Rest assured the supermarkets are not missing out.

Western society has sanitised the harsh reality of meat consumption. Main street butchers shops have moved their cool rooms and cutting blocks out of sight and the meat delivered on styrofoam plastic wrapped trays to supermarkets deceive us about the realities of animal slaughter. Everyone who consumes the flesh of a dead creature be it fish beast or fowl in the guise of sausage, burger or bacon has a duty to acknowledgement that their consumption of meat is only possible because an animal has been killed.

But it doesn’t stop there. The dairy industry is also under close scrutiny. In Australia the two major supermarket chains were guilty earlier this year of sending farmers to the wall by paying then a price per litre that was below the production cost. Social media came to the rescue and the home brand milk languished on the fridge shelf as large numbers of Australians altered a life long habit of choosing the cheapest available and instead purchased milk that was sold at a sustainable price. I hope that continues.

The dairy fight is still not over because our enterprising farmers have found a ready market for dried milk in China. Now local cheese producers are crying out they need more milk, which brings us to the major ethical concerns surrounding the dairy industry. The separation of calves from their mothers, the wholesale slaughter of male calves and the fate of dairy cows once their lactation volume declines is another minefield. I’ll save that for another day.

Meanwhile the organic chicken I used to buy has become difficult to source since Matthew Evans showed the grim realities of “free range” poultry farming on the first episode of his SBS documentary “For the Love of Meat,” and I’m still not sure how to react to the disclosure on the ABC’s Four Corners program that all farmed salmon from Tasmania is artificially coloured.

Confronted with the realities of questionable salmon, hard to get chicken, gut aching pulses, minimal pork, lamb and beef all the while restricting myself to local and sustainable fish and organic eggs, veganism is looking like a strong possibility.

Don’t get me started on manufactured protein replacements.