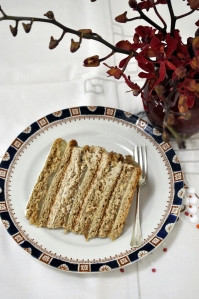 The early 1970s brought me independence, and in between working, partying and sleeping, I cooked. I cooked whatever I felt like eating. I experimented with recipes from magazines, newspapers and cookbooks, not always successfully. This recipe was an instant hit, and so Apple and Cream Torte became my party piece, served at every family celebration for a year a two…..them I moved on.  Today I ask myself why?

I resurrected Apple and Cream Torte this week and served it to friends last night. They loved it.  It’s light and moist with a fine balance of sweetness and acidity, the cake cuts like a dream and has a huge visual WOW factor. Apple and Cream Torte is not difficult to make but it does needs to be constructed a good 8 hours before it’s to be served. It will keep brilliantly for 2-3 days. Serves 12

Sift together the flour, baking powder and ground cinnamon. Cut the cold butter into small cubes and rub it into the flour until the mixture resembles fresh breadcrumbs. Stir the sugar through then mix in the roughly beaten eggs. As soon as the mixture comes together, tip it onto a floured board and knead the dough onto a ball. Chill for 30 minutes. Preheat the oven 160C.  Weigh the ball of dough, then divide it into 8 equal pieces.  Using the base of a 20cm springform pan as a mould and eight pieces of baking paper cut larger than the mould, roll the dough into 8 x 20cm circles. Bake each for 8-10 minutes until golden. Cool flat on a wire.

To construct the cake : Whip the cream with the icing sugar and cinnamon. Select the flattest and most evenly coloured pastry disc for the top. Sandwich the pastry circles to make a multi layered cake. I prefer 4 layers of apple, 3 of cream. Allow to rest for a minimum of eight hours for the layers to meld. Just before serving dust the top layer with seived icing sugar.

2 comments on “Apple and Cream Torte”