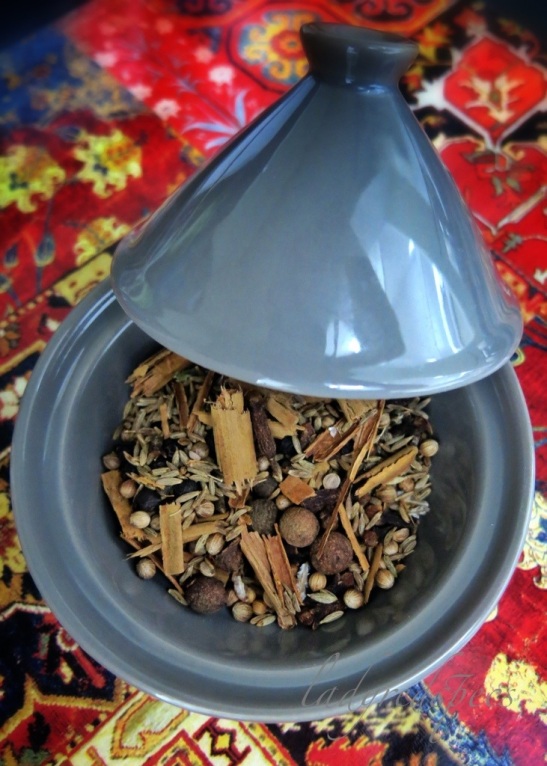 Most cultures have a herb or spice mix that has become synonymous with their cuisine. China has a five spice mix, India garam masala and the Middle East has baharat.

Baharat translates literally as spice. Like any traditional recipe there are many variations, but one thing I have found is the spices will shine if you grind and roast them freshly and use them immediately. My advice is make your own.

I have used both these recipes. I prefer the Ottolenghi formula, largely because of the allspice, but I have also included Herbie’s mix from “Spice Notes” so you can see the subtle variations.

Baharat is indispensible in the Middle Eastern kitchen, especially when cooking with lamb. The batch I made today was used in the stuffing for red Romano peppers, but more about that tomorrow.

Measure the spices. Break the cinnamon/ cassia into small pieces.
Open the cardamom pods, remove the seeds and discard the pods.
Grind the peppercorns, coriander seed, cinnamon/ cassia, cloves, allspice, cumin and cardamom seed in a spice grinder.
My grinder is not very efficient so I finish grinding the spices with a small mortar and pestle.
Grate the nutmeg and add to the the ground spices.
If using Herbies formula, mix in the paprika.
Store in an airtight container and use as quickly as possible.
The flavours will fade fairly rapidly.
Dry roast before using.

This entry was posted on March 19, 2014 by ladyredspecs in Food, Pantry Essentials, Spice blends.