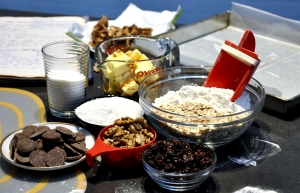 In the 1950s, where I grew up was on the outskirts of Melbourne, the houses were few and far between, there was no public transport and few people owned cars. This was a time when first names were only used by family and intimate friends, when social formalities inhibited natural friendliness, when Australians were far less easy going than they are today. It was up to the kids to break down the barriers, giving neighbours the catalyst to develop friendships. Our over the road neighbours became family friends, the adults, pseudo aunts and uncle. From the time I was in primary school I recall coming home on Friday afternoons to find my Mum and Auntie Myra sitting drinking tea, sharing a sweet treat and indulging in gossip. This pattern continued until long after I had children of my own. Mum’s baking timetable was based on fresh treats for Friday, but for us kids, Auntie Myra’s baking was extra special, she included luxury ingredients such as chocolate. This is Auntie Myra’s recipe.

In a large bowl mix together all the dry ingredients. Melt the butter with the golden syrup, pour into the dry ingredients and mix thoroughly. Press the mix into the tin using the back of a spoon. Bake for 25 mins approx, until lightly browned. Cool in the tin.

Lift the slab from the tin and cut into fingers with a sharp knife. Store in an airtight container.

This entry was posted on June 20, 2012 by ladyredspecs in Food and tagged chocolate chos, oats, slab, slice.